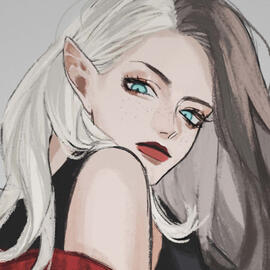 Hey there. I'm Tani. I prefer not to state my age, but I am 21+. I've been playing FFXIV since the end of patch 3.5. Currently studying History as my major, with the intent of going into law after. Alongside history, I have a love of music and I have been training as a vocalist for over 10 years, mostly Broadway and Classical with some Contemporary sprinkled in.

I took up modding in August of 2019, and I am always trying to improve my work and learn new techniques. If you are interested in my work on that, click here!

I love to make new characters. If you are interested in my characters and my silly little thoughts about them, click on this for my OC Profiles!

Ancient as time itself, or so she likes to say, Diana is a being with no recollection of her beginnings. Trained as a silent executioner, Diana has roamed The Source picking up jobs as they come. Originally appearing as a Viera, she now chooses to appear with Elezen ears and fangs. She has a white-blonde streak of hair that appeared after she absorbed Ardbert in the struggle against Hades.

While Diana may be well versed as an assassin, in recent days she has chosen to forgo a careful approach, and has set down her daggers for the gunblade. She is able to swap between stealth and head-on aggression as needed.

e/rp: No | Collabs: no (close friends only) | "can i x?": probably not diana is always off limits

Arrogant and cocky, Amielle is a blade for hire. If you've got coin, you've got her loyalty, until the coin stops flowing anyway. Raised by her father, she was taught how to use a greatsword and an axe. After 5 years of mercenary work, she met a stranger in Ishgard. With their help, she was able to tap into her dark side, and became a Dark Knight. She occasionally still fights as a Warrior, but most often she will be seen with her greatsword.

Additional Comments
-I can rip from Aion, Blade and Soul, Vindictus, and Fashion Cloudy. I can convert Skyrim mods as well. If you want something from a game other than these, you will need to provide a rip for me.
-I take a deposit of 25% of the commission when the price is $50 or more, and I collect the rest of the money after the commission is done. I'll send updates to you so you can see if you like it, adjust things as you would like it.
-If you want ports from indie creators (sims4, skyrim modders, etc) or hair conversions, you need permission. Reach out to the authors, most don't bite.